Because this month was a Quarterly Prize month on the Something Awful Oath Thread, extra prizes were up for grabs if we painted markers of some kind.  Turn markers, objective markers, wreck markers, camo markers, whatever.

Because I already had a fine set of camo tokens from Warmill, I decided to paint up some objective markers for my Haq forces*.  And since I'd been playing a lot of Borderlands 2, what better objectives than these lootable crates from Fenris Games? 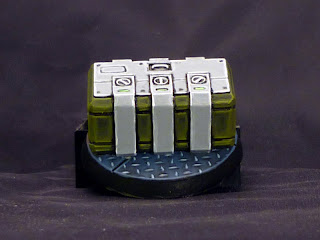 From the outset I knew I wanted to make the crates closely resemble their in-game counterparts, with each one having a unique color scheme that nevertheless was cohesive with the others, and didn't look out of place next to my Infinity forces.  The main unifying element on all the crates is the flat grey panels - just Administratum Grey with a black wash, highlighted towards White Scar. 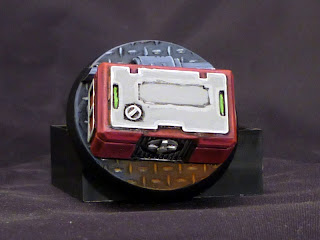 The Borderlands look is cell-shaded with heavy black outlines, so I undercoated with black and tried to keep deep cracks as dark as possible.  The bodies of each crate were base coated and given simple highlighting towards panel edges and corners.  While none of the color schemes are exact matches of the in-game objects, the pink used on the crate above is a close match to several Borderlands objects 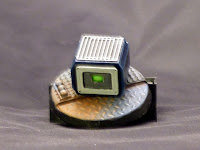 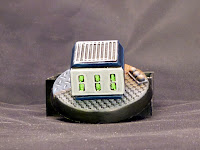 The most important detail is a small one, the green lights on each crate that indicate it hasn't been opened yet.  Though I did a pretty sloppy job on the lights (especially on the rear of the small blue crate, it's awful), the color itself is a good match.  It's just a white undercoat, then a base of Scorpion Green with White Scar mixed in for highlights, and a Thrakka Green wash to blend it in. To make sure the markers matched my Haqqislam troopers, I avoided the use of metallic paints, either on the crates or their bases. 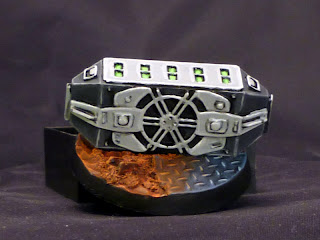 There's no non-metallic-metal techniques on the crates, but the bases (40mm Diamond Plate bases from ForgeCraft) needed to look at least vaguely metallic.  Thankfully this was mostly achieved through simple techniques - a basecoat of Shadow Grey, a black wash, then drybrushing with increasing amounts of Fenrisian Grey.  The raised areas were then picked out in pure Fenrisian Grey.  To further tie it to the Infinity figures, each base was given a touch of martian soil - a watered down patch of Dark Flesh heavily drybrushed with Blazing Orange. 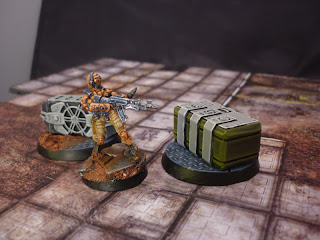 The finished result - while a bit messy in places - looks great next to my Haqqislam figures.  The crates are a little out of scale, but work well with the Infinity aesthetic. 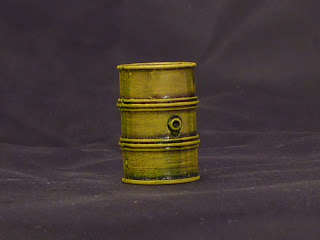 Finally, here is a barrel that I was going to make part of the small-crate marker, but decided against it at the last minute.  Poor lonely barrel.**

* I haven't actually played a game in months
** Don't feel too bad though, it's probably explosive.
Posted by Gravitas at 14:52