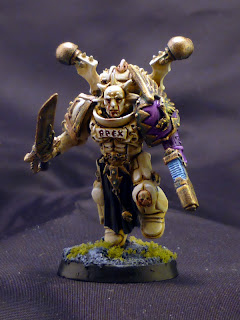 With only hours to spare, I've completed and photographed my August Oath!

A few years back, I decided to make a large-scale diorama.scenic base as part of a Something Awful oath thread.  The requirements were that the diorama be of a clash between at least two models of similar points values/strength.  Since I was painting Tyranids at the time, and because I had a crapload of bits still lying around from the Chaos Terminator Lord (the kit that keeps on giving), I decided to make an epic showdown between a Hive Tyrant and a Thousand Sons sorcerer and his demonic minions. 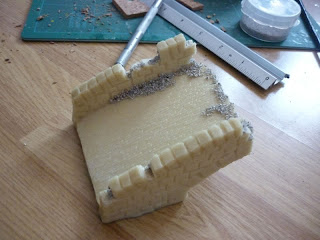 I already had an idea of what I wanted - the sorcerer holding a bridge against the towering monstrosity, and I already had the perfect base - a display case for model cars I had bought some time ago just on the off chance I needed to make a diorama.

Got a bit of painting done on the weekend, in between a trip to the museum to see inside-out animals, and attempting to survive a heatwave in a top-floor flat with no air conditioning or airflow to speak of. 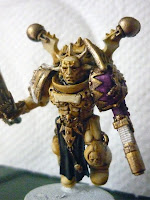 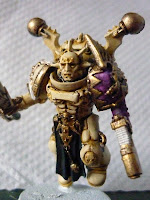 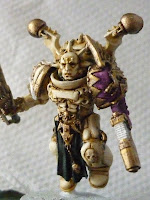 Increasing layers of highlights from left to right.

Starting with the Screaming Skull basecoat, I liberally applied extremely watered-down Balor Brown to the recesses and shadowed areas, not worrying much about overspill.  To bring out the detail further, I applied a more careful Devlan Mud wash to armour seams and carvings.

One of these things is not like the others

Today, Corvus Beli showed off the miniatures for the "spec ops" special campaign characters from the upcoming campaign book "Campaign Paradiso".  Unique, elite members of each faction's forces, they represent the best and most badass the Human Sphere has to offer.

And of course, the lone female figure is wearing a crop top and posed ass out, hand on hip, while her male counterparts are in various stalker/action poses.  Oh and she's wearing combat heels.  Because of course she is.  It's a shame too, because they're all great sculpts.  At this stage though, all I can do is sigh and shake my head.

More pictures after the cut. 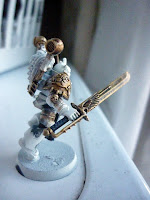 Just a few quick WIP pictures of the Chaos Lord.  The photos are grainy and the paint job looks like ass, but hey, progress! 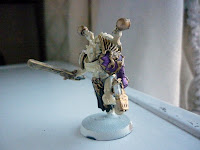 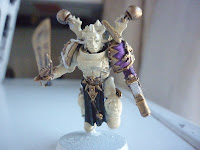 The gold is done, as is the loincloth and armour joints.  I've gone over the drybrush-splatter with white, then given the armour a base coat of Screaming Skull.  Still deciding exactly how I'm going to shade it, as I don't want it to blend in with the gold too much.

Posted by Gravitas at 03:28 No comments:

Back from the burnout

Ever few months I go through an alternating cycle of being really excited about painting tiny spacemen and not wanting to ever touch a paintbrush ever again.  After failing June's oath, I took July off to do things that didn't involve being hunched over a desk.


But now I've got the itch to paint again! So I'm starting off with the lovely individual above, a Chaos Marine Lord, one a member of the Emperor's Children but now the leader of his own warband.