I am the god of hellfire, and I bring you...

Back in this post, I had some work-in-progress shots on a Tzeench Horror that I had converted into something I called a Lava Imp.  There was no sign of it in the May Oath Complete post, but I did finish the little devil, and ended up winning a prize for it!

After sculpting lava-y patches on the original figure, then texturing them with sand, the Imp was given a white undercoat.  I then liberally applied Lammenters Yellow glaze to the areas that weren't raised rock.  This bought up a little more detail and gave me a good idea of how to go about painting the molten lava effect.

The raised areas were given a basecoat of Evil Sunz Scarlet, then drybrushed with Scorched Brown, Abbadon Black, then finally a little Codex Grey.  This let the semi-molten core of the rock show through the cooler outer layers.

The inner lava is pretty much an experiment.  I started by outlining the rocky patches in Blazing Orange, then blended it with Sunburst Yellow, then white, trying to make the brighter ptches were in the center of the limbs or body to give the impression that the Imp is glowing from the inside.  I made the fingers brighter towards the ends for the most part as if they were formed by molten rock breaking out and flowing into shape. 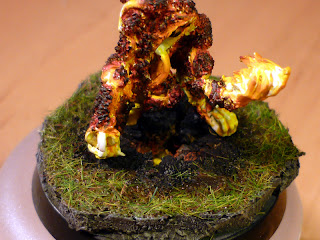 The base is a simple layer of cork with a chaos-star crack gouged into the center, then textured with sand.  I then gave it a Scorched Brown basecoat, with Abbaddon Black around the torn stone.  Flock was added to the non-charred areas, with a little brown and black brushed onto the edges for singing.  The lava was painted in the same was as the Imp.

Given that I'd never painted lava before and I only had around three painting days to do this guy (on top of my regular oath), I'd say he turned out okay.  It's a pretty messy paint job, but I learned a lot from doing it.