A quick rundown on what I'm painting this month for the Something Awful Oath thread.  First up is Nemesor Zahndrekh, the Necron HQ choice.  I picked him up on a whim, mainly as a way to play with some more Verdigris techniques. 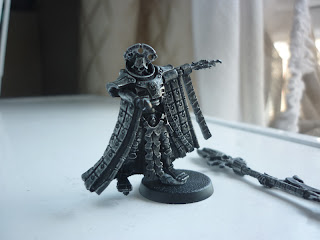 Unlike most of the painting I've been doing recently, I started with a black undercoat.  I then gave the entire figure a Mithril Silver drybrush, both to bring out the detail to make it easier to paint, and to act as a kind of under-highlighting. 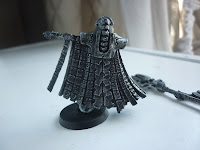 Currently, I'm thinking that the colour scheme will be gold/verdigris, silver/rust, and either a cold white or a distressed ivory, though this may change.  The only thing really set in stone is the gold. 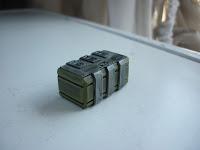 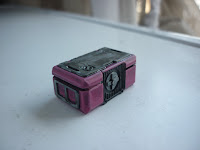 There's a special, quarterly prize up for grabs this month, with the prerequesite being to paint at least 3 game markers of some kind.  I chose some objective markers for Infinity, made out of futuristic crates from Fenris Games.  The'll be mounted on some large scenic bases, but I've left them off for easy painting. 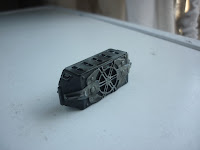 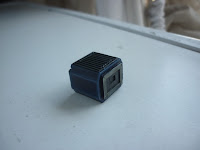 The designs are obviously heavily inspired by games like Borderlands and Mass Effect, and should look great on the tabletop.  I've chosen to paint each style of crate in a different main color, with the unifying element being the light, neutral grey detailing.  Because they're intended to be used with my Infinity force, I'm also following my own rule and not using any metallic paints 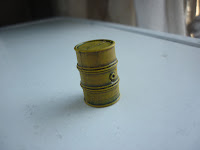 I've also thrown a barrel from the Battlefield Accessories Set into the mix, because who doesn't like (probably) explosive barrels?
Posted by Gravitas at 08:19