How to assemble a Kameel Remote - part 1

Kameel Remotes are some of the best miniatures in the Haqqislam faction, and arguably in the entire Infinity range.  They are also, as I found out recently, a complete bastard to assemble.

Knowing this would be the case, I decided to document my pain to serve as a tutorial (and warning).  Note that I've chose a very specific way to solve the main problem with the remotes (the base extensions) that might not be to everyone's liking.


First of all, unpack and sort the contents of the Kameel box.  It should include everything in the picture below  If it doesn't, Corvus Beli's customer service will send you out replacements, just quote the complaint code that comes on the little slip of paper. 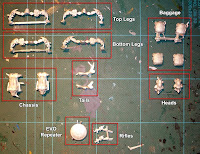 Next, trim and file off any flash and mould-lines (I've included cleaned up versions of most parts in the picture).  Be careful not to clip off connectors like the ball joints for the rifles.  The hoof-like parts on the ends of the legs are the hated base extentions. Leave them on*, but cut off the thin bars between them. 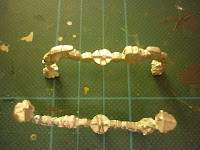 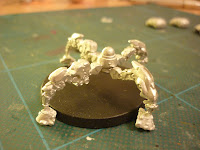 The legs with the dome rest on top of the other pair, there's a cross-shaped groove/slot on each where they connect.  You may have to file the grooves a little deeper to ensure a good fit.  Mark the center of each connector by scoring an X with a craft knife or scalpel. 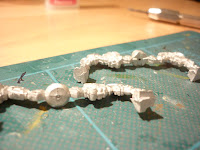 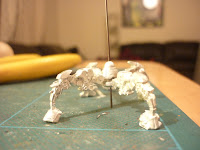 Drill a hole through both sets of legs where you marked the X.  Try to keep the holes aligned with each other.  You should then be able to thread a brass rod through the leg sections, holding them together.  Leave plenty of rod at the top and bottom, you can trim it down later.  Theoretically you could glue this section together now, but I left it till everything else was ready. 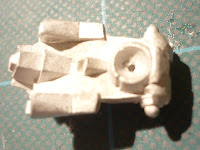 Drill a hole in the bottom cupola of the chassis, where the legs will connect. 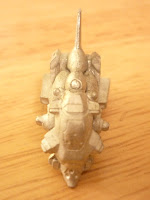 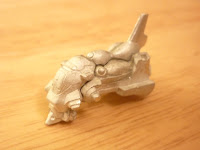 Assemble the body of the remote by glueing the tail to the chassis, then the head.  I found these sections fit together extremely well with no need for filing or gap-filling.  Leave the baggage off for now, the remote will be easier to paint without it. 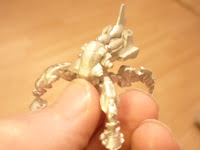 Even though the legs and body aren't glued to each other, it all slots nicely together.  The larger, rounded legs are the Kameel's front limbs, the more spindly, angular ones the rear.  Don't get them confused! 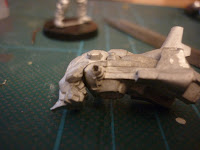 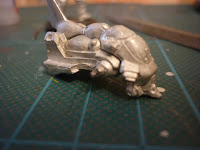 I probably should have done this step before assembling the body, but it really doesn't matter.  If you're going to arm your Kameel, you'll need to drill and pin the joints where the weapons attach.  Just be careful when drilling out the rounded joints, you may need to file them slightly flat so that the drill bit doesn't slip. 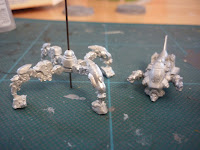 Before glueing the weapons, make sure that they're at an angle that won't interfere with the legs.  I found I had to tilt them up and out slightly to avoid the knees.  Once you're happy with how everything fits together, glue the leg sections together, and glue the weapons to the body. Don't glue the body to the legs yet. 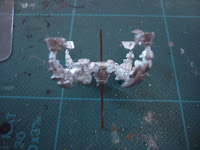 You can also trim the top and bottom of the brass rod down to the lengths you want.  To ensure stability, I decided to leave enough rod underneath the remote to touch the base, as additional support.  When painted black it will be barely noticeable on the tabletop. 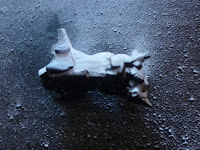 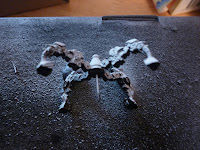 The remote is now ready to be primed.  I've experimented with priming the top and sides white and the underside black, to increase contrast.  They're not included here, but don't forget to prime the baggage as well. 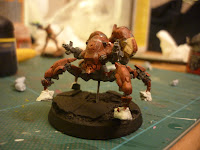 Basecoats. I'll be using my standard orange scheme, with red accents similar to my Jannisary. For now it's mainly just red/brown.  The body is still not glued to the legs, the baggage compartments aren't glued to the body, and the brass rod holding it up isn't glued to the base, but everything balances perfectly.  In the next post I'll go over attaching the remote firmly to the base, and blending in those annoying base extensions.  And finishing up the paint job too I guess.


* The other option is to cut them off and reposition the legs so that they all fit on the base. I considered this for about 5 seconds before writing it off as Too Much Work.
Posted by Gravitas at 15:28